The Spanish painter, etcher and lithographer Francisco de Goya was born on March 30, 1746, in Fuendetodos near Saragossa. His real name was Francisco José de Goya y Lucientes. It can be proven that he was in the studio of the Saragossa painter José Luzán (1710  85) already in 1760 as an apprentice. Around the year 1766, Goya went to Madrid, where he received instruction from Francisco Bayeu y Surbias (1734  95).
With his teachers encouragement, the artist took a trip to Italy in 1770. Upon his return to Saragossa in 1771, he presented sketches for the painting of the barrel vault of the Basilica El Pilar to the building committee and received his first significant commission. From 1772 to 1774, Goya frescoed the Carthusian church Aula Dei at Saragossa. These two works by the artist were created under the strong influence of Giovanni Battista Tiepolos (1696  1770).
Beginning in 1775, Francisco de Goya was living once again in Madrid. Here he received his first government commission: by the year 1780, he had created a total of 36 tapestry boxes for the royal tapestry maker Santa Bárbara. Also in this year, the painter became a member of the Real Academia de Bellas Artes de San Fernando in Madrid. He was named its president in 1785. Goya returned to Saragossa in 1780 to continue painting the cupolas in El Pilar. After conflicts with the building committee and a final quarrel, he found himself already in 1781 back in Madrid. After the painter was introduced to the brother of the king, he painted several pictures of the heir apparent and his family. In 1785, Francisco de Goya began to work for the Duke of Osuna. Until 1799, he completed jobs of the most varied types for him. He also received a repeat contract for tapestry designs for decoration of rooms in the Escorial.

After Charles IV (1748  1819) ascended the throne in 1788, he was appointed the Kings painter. A stroke in 1792 left the artist deaf. From now on, his color scheme changed as well as his subjects. He criticized human failings and political, social and church injustices. In 1795, Goya took over from Bayeu as the director of the painting class at the Academia. As a preferred portraitist, he created some of his greatest pictures in the years up to 1800. In these years, the series of etchings titled "Los Caprichos" (1796/97) also appeared. These were the point of departure for Goyas international fame. Two of his main works, the "naked Maja" and the "clothed Maja", treat the theme of Venus in repose and were done in the first years of the 19th century. In the series of etchings titled "Desastres de la Guerra", his impressions from the War of Independence, particularly the battles in Aragon, found expression.
Goya thematized the invasion of the Napoleonic troops and the battles that resulted from it in the work "The Execution of the Defenders of 1808" (1814). After his accession to the throne in 1814, Ferdinand VII set Goya back in his old place of honor as court painter. However, the artist withdrew more and more from court into his country home Quinta des Sordo. He decorated it with frescoes and, beginning in 1820, he created the black series "Pinturas Negras". Because Francisco de Goya did not like conditions in Spain, he decided to emigrate to France. Here he painted the "Milkmaid of Bordeaux" (1827/28) and his last pictures.
Francisco de Goya died in Bordeaux on April 16, 1828.

Would you like to sell a work by Francisco de Goya? 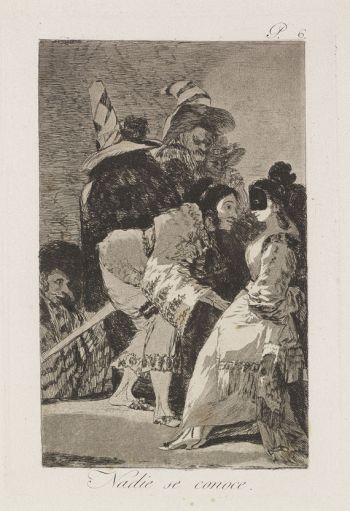